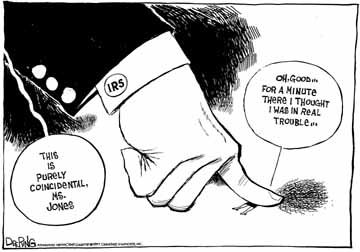 Jones and her husband, Stephen, received a notice Friday that they would be audited for their 1995 tax return, said Susan Carpenter-McMillan, Jones' adviser and chairman of the Paula Jones Legal Fund since July.

The notice arrived roughly a week after a Little Rock, Ark., judge granted a request from Jones' lawyers to leave the case. The lawyers, Gil Davis and Joseph Cammarata, said they had "fundamental differences of opinion" with Jones, who rejected a proposed settlement that involved giving her $700,000 and a statement of regret from Clinton for any damage to her reputation.

While stopping short of calling the audit outright retaliation, Carpenter-McMillan said it seemed strange that federal auditors were suddenly so interested in the Joneses, who own little property and live off of Stephen Jones' $37,000 annual salary.

"I find the timing very peculiar," Carpenter-McMillan said in an interview. "I would only ask the American public what they think about the timing. Most people in the public would find it a little odd."

Jones, a former Arkansas state employee, filed a lawsuit claiming that Clinton asked her for oral sex in a Little Rock hotel room during a May 1991 conference he attended as governor of Arkansas. Clinton has denied Jones' accusation, saying he does not remember meeting her.

In an appearance Sunday on NBC's "Meet the Press," Carpenter-McMillan said Jones is entitled to an apology or "some kind of clarification" from Clinton to make up for the humiliation hurled at her by "frothing pit bulls out of the White House."

"This has never been about money for Paula," Carpenter-McMillan said. "If she took my advice, I would say, 'What you demanded in (1994) is very different than what you should demand today,' what they put her through the last three or four years."

She asked that Jones' grievances be resolved in a way that's "broad enough, obviously, for the president to accept it but narrow enough for Paula to accept it."

As for the audit, Carpenter-McMillan said she was "just appalled" when she learned of it, and said there is nothing about Jones, a housewife with no job, that should draw IRS scrutiny.

"They're a family with two little children. They have one car, they rent a little apartment," Carpenter-McMillan said. "How many people renting and making under $40,000 a year get audited?"

She said Jones is not involved in her legal defense fund, which The Washington Times reported has collected between $250,000 and $300,000 in small gifts on Jones' behalf.

"She never signed a check. She doesn't even get the bank statements," Carpenter-McMillan said.

By The Associated Press